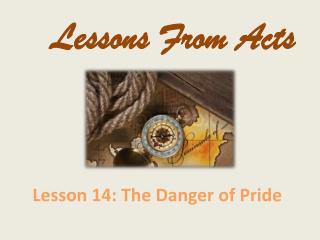 Lesson 14: The Danger of Pride Lessons From Acts. Lesson 14: The Danger of Pride. Pride. A high or inordinate opinion of one's own dignity, importance, merit, or superiority, whether as cherished in the mind or as displayed in bearing, conduct, etc.

Lesson 14: The Danger of Pride

UNIT 10 NATURE IN DANGER - . part c: listening. before you listen. work in pairs: look at the pictures and name them.

Synonym: ashamed Antonym: proud - . regretful: feeling or showing regret . after committing a crime, the criminal was

The Danger - . of anger. he who angers you conquers you.  elizabeth kenny. for every minute you are angry, you lose

Danger of introductions - . you generalize so much that you miss something important y ou create stereotypes about the

Dangers to the pure heart - . in this study. what is a pure heart? (what god’s word says about purity of heart)

“Pride comes before a fall” Discuss - . ozymandias. lo: to interpret the meaning and imagery of ozymandias

Lesson 4 - “The Time between the Old and New Testaments” - . intertestamental period. let’s review a brief history

Lesson 14 - . request to witness doctrine and covenants 5. “ humble  yourselves in the sight of the lord, and he shall

Lesson 14 - . essential words for the toefl reem almarwani. there is ample evidence that the young man was speeding when