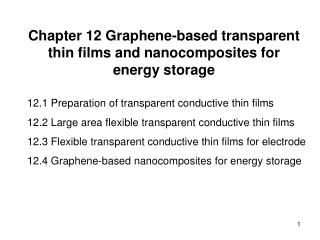 Thin films - . the index of refraction (h) for a medium is defined as the speed of light in vacuum (c) divided by the

Thin Films - . colors in nature are not only due to reflected wavelengths. leaves – spectrum butterfly – interference

STUDY OF TRANSPARENT FERROELECTRIC THIN FILMS BY OPTICAL REFLECTOMETRY AND ELLIPSOMETRY - . i. aulika. institute of solid

Deposited thin films - . need to be able to add materials “on top” of silicon both conductors and insulators