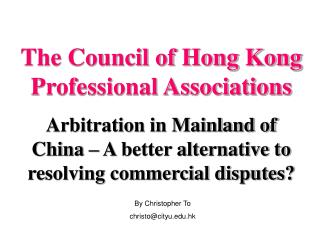 The Council of Hong Kong Professional Associations Arbitration in Mainland of China – A better alternative to resolving commercial disputes?. By Christopher To christo@cityu.edu.hk. Outline. Why use Arbitration Key Factors in drafting Arbitration Clauses The Best of Hong Kong - The vibrant city of hong kong is one of asia’s most beautiful destinations! formerly a british

The Battle of Hong Kong - . after the japanese attacked pearl harbor, they attacked hong kong (british colony) many knew

The Battle of Hong Kong - . canada’s pows in japan. japanese troops. in 1941, japan was intent on the expansion of its

Professional Image Consultant in Hong Kong - Monica zionede is the ceo and founder of feliz consulting, which provides