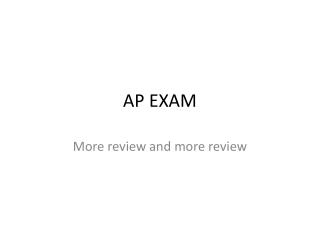 AP EXAM. More review and more review. Soil. The weathered portion of the earth’s crust that can sustain life Young soils are not leached of their nutrient Older soils are leached and have little organic material remaining Exam - . exam starts two weeks from today. amusing statistics. use what you know about normal distributions to evaluate

Final Exam Review - . class: i really appreciated having the opportunity to share this semester with you. good luck on

Level II Exam Only Session - . issued july 2006. once the exam begins. you will not be allowed to leave the room. please

AQA GCSE POETRY EXAM - . conflict. l.o. by the end of this session you will be able to:. use an acronym to help remember

Exam 2 Review - . harish palakurthi. exam 2. must have wvu id to get in show up 15 minutes early on your exam day similar