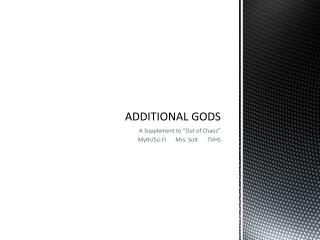 ADDITIONAL GODS - . a supplement to “out of chaos” myth/ sci fi mrs. solt tvhs. goddess of fertility, grain, and

Gods - What are gods?. what did some of the gods do?. gods. where were gods placed?. who was the oldest god?. the

Lesser Gods - . introduction. greeks and romans had gods for almost everything the gods we talk about today are not as

Egyptian Gods - . connection to the underworld. ammut. “eater of the dead” she stands by the scales of the hearts and

The Gods - . zeus (jupiter). the chief of the gods aka: lord of the sky, rain god, cloud gatherer weapon: thunderbolt

Roman Gods - . the major deities amy p. turner indt 501-03. apollo. son of jupiter and leto , and the twin brother of

Egyptian Gods - . introduction. what is now known as egyptian mythology was the religion of ancient egypt (3300-30 bc)