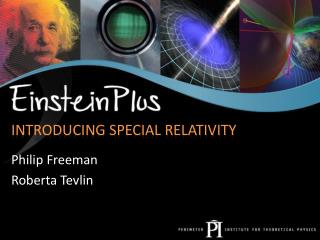 Introducing Special Relativity. Philip Freeman Roberta Tevlin. Planet Relativity . Imagine a world where scientists have not realised that their planet is a sphere. A ù. ù B. Two scientists, Roberta and Philip, are observing two rockets, and measuring their heights above the horizon.

2. Einstein's postulates in special theory of relativity - . imagination is more important than knowledge. in 1905 the

Albert E instein - . introduction. albert einstein was born on march 14, 1879 in germany. he is widely known as the

Introduction to Relativistic Mechanics - And the concept of mass. cern hst2014. gron tudor jones. university of

The Theory of Special Relativity - . learning objectives. c onsequences of applying, in addition to the principle of