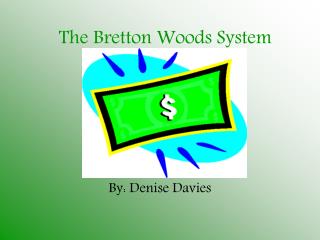 The Bretton Woods System. By: Denise Davies. History . Named for the Bretton Woods Monetary Conference which took place in New Hampshire, during July 1-22, 1944. 44 allied nations and one neutral

The International monetary fund - . when? founded in 1944 during the bretton woods conference why? to prevent economic

The Gold Exchange Standard and beyond - . yalta was more than just the political division of the world. 1943. bretton

Outline for 10/31: International Money II The Impossible Trinity The Bretton Woods Institutions - Collapse of the

The international monetary system - . lecture outline. the notion and the functions of the ims gold standard system the

The Bretton Woods System - . create a set of rules that would maintain fixed exchange rates in the face of short-term