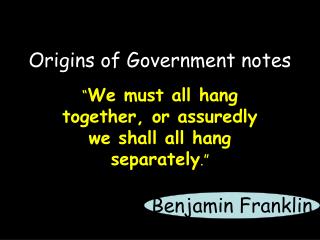 Origins of Government notes. “ We must all hang together, or assuredly we shall all hang separately .”. Benjamin Franklin. American government, its powers and limitations , were brought to these shores by the English colonists. On the Origins of the State - Anthropology 101 scott a. lukas, ph.d. the

Chapter 2 The origins of the sustainability problem - . learning objectives. in this chapter you will learn how economic

Lecture 1: Prerequisites - These notes are intended for use by students in cs0401 at the university of pittsburgh and no

The Ecology of Human Origins - (human paleontology, archeology, paleoclimatology) who are we, ecologically speaking?