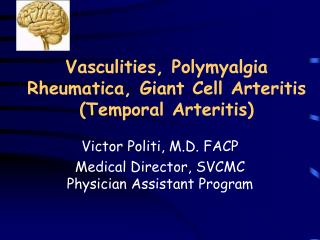 Polymyalgia Rheumatica and Giant Cell Arteritis - . history of pmr and gca. first description: 940-1010 bc treatment was

THE SELFISH GIANT - . the giant’s garden was beautiful, and children loved to play in it. the giant, who was selfish,