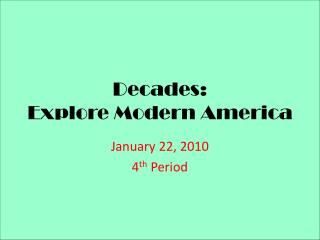 The Forth Valley Experience (a journey across two decades) - . peter murdoch. nhs forth valley. geography history-

Crime in America - . crime trends have shown significant decline for the past several decades. what is crime?. one can

Why Take EXPLORE? - . explore shows your strengths and weaknesses in english, mathematics, reading, and science. explore

Ch.7. Identifying &amp; Dating Modern Groundwaters - . the “age” of groundwater it’s not really age, rather it

Why Take EXPLORE? - The explore will be given in homerooms on thursday, october 18, 2012 . testing will begin promptly at

1920’s - The twentieth century was known for distinctive “decades of style”, where styles, fashions and images

&quot;There are decades where nothing happens; and there are weeks where decades happen.&quot; - -vladimir