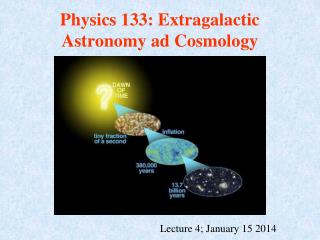 Physics 133: Extragalactic Astronomy ad Cosmology. Lecture 4; January 15 2014. Previously. The dominant force on the scale of the Universe is gravity Gravity is accurately described by the theory of general relativity

Olbers Paradox - . why is the sky dark? if the universe were infinitely big and infinitely old, there should be no dark

THE EXTRAGALACTIC DISTANCE SCALE - Phas 1102. the extragalactic distance scale. all distant galaxies are receding; their

Physics 270 – The Universe: Astrophysics, Gravity and Cosmology - . the history of cosmology. mythology vs the

Astronomy and Astrophysics – the Beginning - . nicolaus copernicus. copernicus was born in poland and studied

Physics Beyond the SM - . wim de boer, kit. outline. lecture i ( sm+cosmology ) what are the essentials of a grand