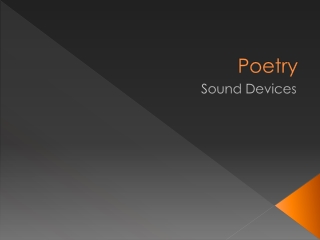 Poetry. Sound Devices. Meter. poetry's rhythm, or its pattern of stressed and unstressed syllables. Meter is measured in units of feet ; the five basic kinds of metric feet are indicated below. Accent marks indicate stressed ( / ) or unstressed ( u ) syllables. Type of Metric Feet.

“A Poison Tree” - . by william blake. look at the following cartoon…. try to determine what is going on in each

A poem for Bibi Sakina. Sakina, Sakina, we cry for you. whenever we think about you, - Whenever we are blessed to be