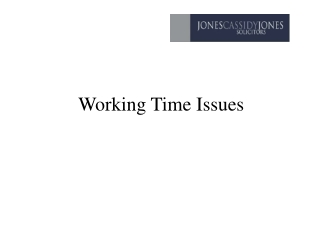 WORKING ISSUES - . what are the common problems in an office?. the pessimistic. having a difficult boss. people wasting

Working Time Directive - . perhaps an odd choice to be leading this discussion. i am a small animal practitioner

Working with Time in ParaView - . attention. these slides are incomplete and are provided for the ieee vis 08 dvd. the