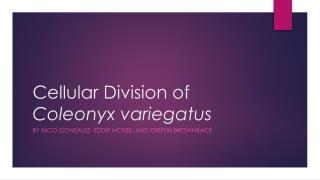 Cellular Respiration and Energy - . cellular respiration overview. breakdown of glucose begins in the cytoplasm: the

Cellular Division - . when do cells divide?. cells obtain nutrients and eliminate wastes through the cell membrane. there

The Cell Cycle and Cellular Reproduction - . cell division. 1. what is the sequence of events in the cell cycle? 2. what

What do you know about cellular respiration ? - . warm-up: carbon monoxide molecules bind to electron carriers. explain

The Cell Cycle &amp; Cellular Division - . i. cell division:. all _______ are derived from preexisting cells (cell

Cellular Division - . chapters 6, 27, and 42-43. objective 1: structure of chromosome. dna is coiled around histone