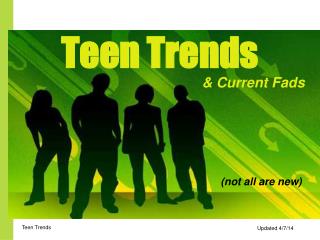 Cutting: A Teen Epidemic - . by: robert and rickard bagott , warren halderman and jack roach. how it starts…. usually

Examples of teen film posters and dvd covers - . rebel without a cause posters. other posters. not another teen movies.

TEEN TRIBUNE IN THE MIDDLE SCHOOL CLASSROOM - Using technology and news to develop life-long readers. teen tribune in the

Issues, Fads , Trends - . professional article summary. a) overall summary of the article, b ) why this is a trend in the

Trends and Teen issues - . about us…. the right solution counseling located in eureka work with children and adults

Trends from CES 2016 - The consumer technology trends that will matter in 2016. source: