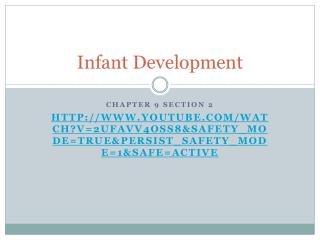 Infant Development - . objectives: you will be able to identify and describe the areas of development explore the purpose

Infant Development - . routine and care. feeding. feeding is more than just giving nourishment, it is a time for physical

Infant IGDI Development Team - What are igdis and why use them? dale walker, phd, jay buzhardt, phd &amp; barbara