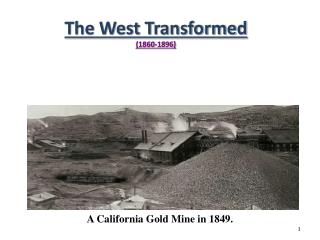 The West Transformed (1860-1896). A California Gold Mine in 1849. How did mining and railroading draw people into the West?. gold. Mining and Railroading. Boom Towns.

Looking to the West, 1860-1900 - . standards. g. identify and evaluate the influences on the development of the american

Ch 17 – The West Transformed - . i can understand how the growth of big business affected the development of the west.

The West and the New South - . chapter 26. 1. what groups were responsible for settling the west?. miners