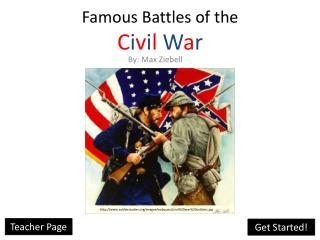 Famous Battles of the C i v i l W a r. By: Max Ziebell. http://www.soldierstudies.org/images/webquest/civil%20war%20soldiers.jpg. Teacher Page. Get Started!. O b j e c t i v e s. Given this lesson, students will be able to identify the state in which battles were fought with 70% accuracy.

Battles of the Civil War in SC 8-4.5 - . objective: to identify the date, winner, and significance of the major battles

Civil War Timeline - . december 1860.  south carolina seceded from the union in 1860 after abraham lincoln was elected

The Major Battles of the Civil War - . vs. battle of fort sumter. fort sumter - april 12 1861. located near charleston,