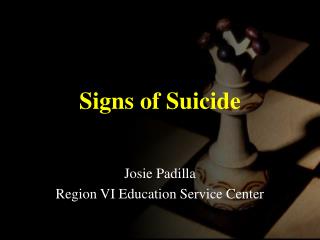 Warning signs of suicide - . warning signs are the earliest observable clues that show that a person is at risk of

Suicide and the Warning Signs - . katie lawler p.1 10/15/09. what's it about. my section is about how suicide can affect

Suicide and the warning Signs - . ricky barajas per.2. slide 2. this section is mostly about the signs of suicide it also

SOS Signs of Suicide ® Some Secrets SHOULD be Shared… - . let’s talk for a moment about depression. true or false?.

Signs of - . stress!. stress affects your entire body your mind your emotions your physical health your behavior.

SUICIDE - . please keep in mind these are guidelines every suicide is different if you have any doubts or feel suicidal

Suicide - . what does the bible say?. people think about it. people commit

Suicide - . “there is but one truly serious philosophical problem, and that is suicide. judging whether life is or is

Suicide - . what are signs of suicide?. jonathan, 22, committed suicide one day after being released from the hospital.