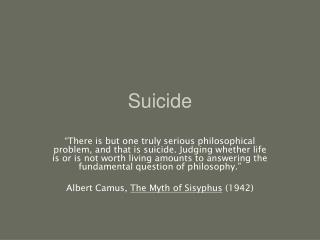 Suicide. “There is but one truly serious philosophical problem, and that is suicide. Judging whether life is or is not worth living amounts to answering the fundamental question of philosophy.” Albert Camus, The Myth of Sisyphus (1942). Outline:. What suicide is and how it is studied SUICIDE - . please keep in mind these are guidelines every suicide is different if you have any doubts or feel suicidal

Suicide - . what does the bible say?. people think about it. people commit

Suicide - . what are signs of suicide?. jonathan, 22, committed suicide one day after being released from the hospital.

Suicide - . mackenzie, mary, sharon. suicide prevention quiz: . when someone is thinking about hurting themselves they

Suicide - . journal - suicide susie is really angry with her friends. she has been angry with them for several weeks but

Suicide - . a sensitive subject which also forms part of the deviance section, here the emphasis is on using it as an

Suicide - . by: julie wheeler. who is at risk?. the elderly have the highest suicide rate, particularly older white

Suicide - . “most of the important things in the world have been accomplished by people who have kept on trying when

Suicide - . chapter 10. suicide. suicide is a leading cause of death in the world there are about 700,000 people who die

Suicide - . a permanent solution for a temporary problem. test your knowledge. which of the following would you say is

Suicide - . the comparisons between suicide rates in lithuania and the united states. what is suicide?. suicide is when a