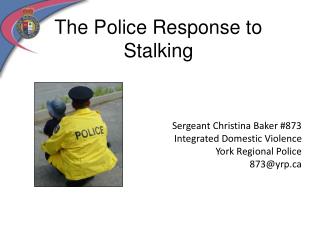 The Police Response to Stalking

The Police Response to Stalking

Working With Stalking Victims - . victim advocates. what is stalking?. a course of conduct directed at a specific person

Respect in the Workplace: Violence &amp; Harassment - . we would all like to think ourselves as safe at work,

Stalking - . the term stalking makes one think of…. phone calls sending letters or gifts waiting outside a person’s

Forensic Psychology - . forensic psychology is one of the newest and fastest growing areas of psychology , and one of the

STALKING AND CYBERSTALKING - . when your life changes at someone elses hands. what woud you do if someone:. closed all

Facebook Status Stalking - . ga b vass &amp; britt gumerman. today one of the ever growing fads around the world is

317 Queen St - . who we are…. macarthur legal centre was previously known as campbelltown community legal centre and