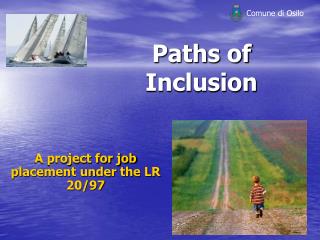 Comune di Osilo. Paths of Inclusion. A project for job placement under the LR 20/97 . A project that comes from afar. A Plethora of Paths - . eric larson may 18, 2009 seattle university. paths are commonly used in static analysis

Paths of Glacial Transport - Types of glacial deposits. drift: all deposits in any way related to glaciation.till:

Wandering Paths of Life - . how i ended up teaching english in central china. life during and after university. what is

Inclusion - . national curriculum statutory inclusion statement (2000):. “schools have a responsibility to provide a

Inclusion - . how did that make you feel?. tips and hints for dealing with global delay in your classroom from:

Inclusion - . by katie koeslin. “inclusion is consistent with multicultural educations, and [with] a world in which

Clue Paths - . the challenge. highlight all the squares that can be reached in # of steps shown on one die move only

Shortest Paths - . usaco january. good job to karen who promoted to gold also johnny, who tied for 3rd place out of the