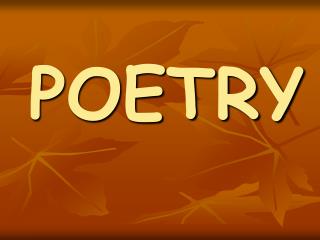 POETRY. Yang-Wan-Li. “A man doesn’t go in search of a poem—the poem must come to him.”. Poetry. A genre of literature that expresses ideas, feelings, or tells a story in a specific form (usually using lines and stanzas). Key Elements of Poetry. form speaker sound imagery