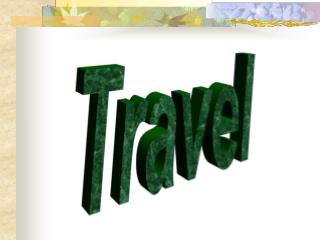 Travel. Text A In the jungle Text B Illinois journey. Unit 8 Travel. Sharing the following quotations with students. Travel can be one of the most rewarding forms of retrospection. ----Lawrence Durrell Travel, Travel, Travel! - . 2013 idaho conference on refugees beth rutten-turner. the world is a book, and those who do

Travel - . why do people travel? have a r est explore n ew places - for e ducation – to study practise a

Travel - Is the movement of people between distant geographical locations. travel can be done by foot, bicycle,

TRAVEL - . the fun part of first. planning. start early, as in october 1 select your first regional register on time

TRAVEL - . made by : maja špoljarić &amp; lucija brašnić 6. a. today people travel a lot you can travel from side

Travel - . the office of student life. travel defined. traveling on behalf of depaul is defined as your organization is