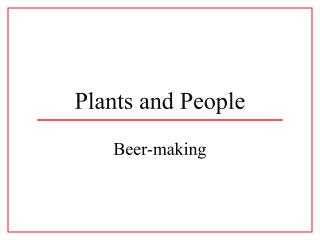 Plants and People. Beer-making. Beer is proof that God loves us and wants us to be happy ---Benjamin Franklin. Beer has been brewed for millennia. Beer is one way of “saving” carbohydrates from grain. Safer than water…. FERMENTATION. Sugar . Carbon dioxide + ethanol. Types of Beer. Ales.

“…as the days of a tree…” - . why would this be important to us today? relating trees and people airo – john

CHAPTER 8 Photosynthesis - . sheldon: revised 2011. plants use. sunlight energy to make their own food you tube plants