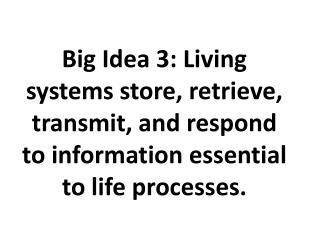 3.A: Heritable information provides for continuity of life. 3.A: Heritable information provides for continuity of life.

Essential knowledge 3.A.1: - . dna, and in some cases rna, is the primary source of heritable information. iv . trna

For Your Information - . hogs are raised to produce pork products such as pork chops, ham, pork tenderloins, and pork

Continuity &amp; IVT - . section 1.4. continuity at a point. a function f is continuous at c if the following three

Aim: How does DNA store the genetic information? - . dna. d eoxyribo n ucleic a cid. what is dna?. carries the

Living the Moral Life Well (And Helping Others Along the Way) - . session 29. i. introduction:. ii. living the moral

Essential knowledge 3.A.1: - . dna, and in some cases rna, is the primary source of heritable information. iv . trna

Water : A Molecule Essential for Life - . thoughts to ponder……. why can’t we survive more than a week without

Essential Elements of Life - . chemistry review. atoms the smallest unit of matter that still retains the properties of

HeLa cells - . what ap board says you need to know about mitosis and meiosis. video link .