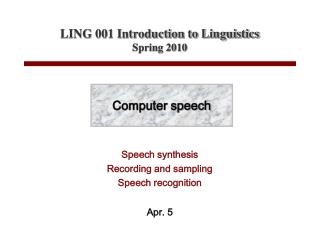 Computer speech. Speech synthesis Recording and sampling Speech recognition Apr. 5. Speech synthesis. Wolfgang von Kempelen (1734-1804) constructed one of the first working synthesizers. It had a reed that kept vibrating by an airstream from bellows. Speech - . sending verbal messages. language is . . . . system or group of elements working together. symbolic or stands

SPEECH - . its nature and importance. speech. speech is the vocalized form of human communication. it is based upon the

Speech - . unit 3 week 4. requirements. must be 4-5 minutes long 3 points will be deducted for every 10 seconds over or