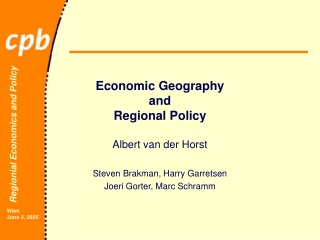 Use of Regional Agricultural Economic Models for Policy Analysis - . stephen hatchett ch2mhill. why use a model at all? .

Regional &amp; Economic Geography - . sol review. maps that change or two names. 1. 2. give a title for each map how

Regional Policy - . convergence or divergence. the early days. no mention of regional policy or regional imbalance in the