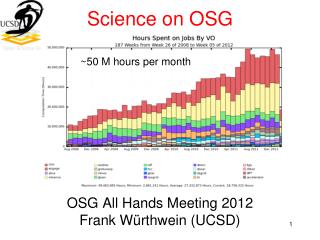 ~50 M hours per month. Science on OSG OSG All Hands Meeting 2012 Frank Würthwein (UCSD). Let ’ s exclude HEP and pick topics from the rest. Up to ~12M hours per month or ~25% of total. Themes for this talk. One Science Theme Protein Structure Community Theme