What Are We Learning Today? - PowerPoint PPT Presentation 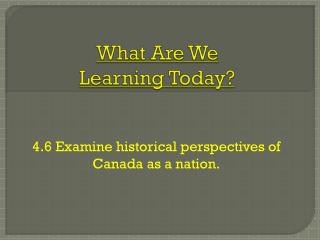 What Are We Learning Today?

What Are We Learning Today?. 4.6 Examine historical perspectives of Canada as a nation. http://www.youtube.com/watch?v=1P2y1F5PMjE. Canada & Self-Determination.

What Are We Learning Today?

Today’s Objective (learning goal) - . to identify how fossils are used as evidence in changes within a species. clues

What are we learning? Roger Holdsworth r.holdsworth@unimelb.au - Student initiatives in values education, civics and

What will we learn today? - What makes an enzyme specific to one type of reaction (in other words, what determines the

What We Will Learn Today: - . what areas did progressives think were in need of greatest reform?. progressivism in the

The Challenges of Teaching and Learning - . iowa state university teaching seminar august, 2005 center for excellence in

What are we learning about today? - . what does john watson, behaviorist theory, and children have in common?. jean

YEAR OLDS - . what are we learning today?. standard et-ece-8: explore the growth, development, and care of the preschool

Learn about - . !. u. do you know what kind of learner you are?. there are different ways that people can learn. do you