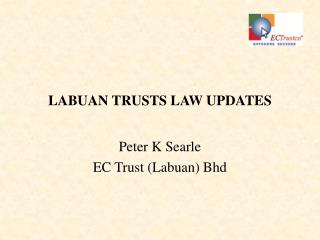 LABUAN TRUSTS LAW UPDATES. Peter K Searle EC Trust (Labuan) Bhd. Labuan Offshore Trusts Act, 1996 (“LOTA”) . Section 7.(1) A trust is an offshore trust where –   (a) the settlor is a qualified person [non-resident of Malaysia] at the time the trust is created; The common law of trusts - . ownership and obligation lionel smith 22 march 2011. a bill of

Employment & Labor Law Updates - Every person needs employment so that he/she can earn money and lead his/her life. a

Chapter 50: Wills, Trusts, and Elder Law - . § 1: wills. will provides for a testamentary disposition of property. a

Chapter 50 Wills, Trusts, and Elder Law - . § 1: wills. will provides for a testamentary disposition of property. a

Trusts Under the New Family Law Act - . the relevant sections of the family law act and their effect on trust property

2010 Law and Rule Updates - . review of new legislation and child care requirements presented by the nc division of child

Today’s topic on trusts law: Modification and termination - . there is no problem modifying or terminating an

Labuan Trust Company - With the establishment of a labuan trust company, you can enjoy no tax scheme for the assets and