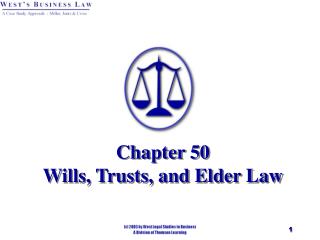 Chapter 50 Wills, Trusts, and Elder Law . § 1: Wills. Will provides for a Testamentary disposition of property. A will is the final declaration of how a person desires to have his or her property disposed of after death. Testate (One who dies after having made a valid will). Chapter 50: Wills, Trusts, and Elder Law - . § 1: wills. will provides for a testamentary disposition of property. a

Wills and Trusts - . professor jenkins. “in terrorem” clause. “a beneficiary shall forfeit his bequest under the

Chapter 46 Wills and Trusts - . learning objectives. what are the basic requirements for executing a will? how may a

Chapter 24 Wills, Estates, and Trusts - . lesson 6-1 legal consequences of death. death and the law. when a person dies,

Chapter 29: Insurance, Wills, and Trusts - . learning objectives. what is an insurable interest? when must an insurable

Wills, Trusts & Estates - There are very few decisions that are as important as the end-of-life decisions. planning

Wills, Trusts and Estate Planning - It’s certainly human to delay putting together an estate plan when it means having

PREMIER WILLS &amp; TRUSTS - . maximising the efficiency of your will. members of the society of willwriters.