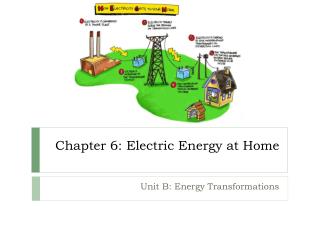 Chapter 6: Electric Energy at Home. Unit B: Energy Transformations. 6.1 Generating Electric Energy. A generator is a device that makes electricity. Michael Faraday made the first electric generator in the early 1800s. ELECTRIC CHARGE Chapter 16 - . just as the mass of the earth exerts an invisible force on you because of your mass. any