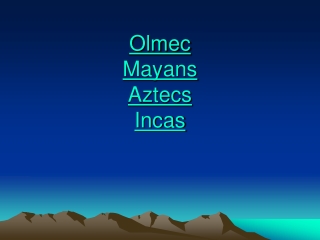 Olmec Mayans Aztecs Incas. Olmecs and Mayans. Mayans. Began to develop around 300 A.D. in what is now southern Mexico, Guatemala, Belize, Honduras, and El Salvador Known as “The People of the Jaguar”. Olmec Influence on the Mayans. Maize Ceremonial centers with temple pyramids The Mayans, Aztecs, and Incas - . the americas. mayans. aztecs.

The Aztecs, the Mayans, and the Incas - . what you ’ ll learn…. * throughout this unit you will gain knowledge about

Toltecs , Incas, Aztecs - . toltecs. moved into southern mexico from north around time of mayan collapse took over and

The Aztecs and Incas - Way of

Mayas, Incas, and Aztecs - `. you have been selected to join a group of scientists who are studying the lifestyles of the

Aztecs, Incas, and Mayas - . by samantha imrich. standards. the three major pre-columbian civilizations that existed in

The Aztecs and The Incas - . www.artzia.com. aztec background. originally named mexica located in what is now central