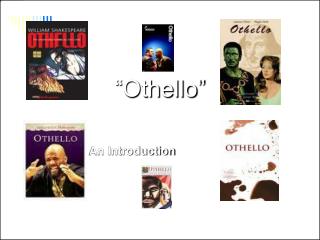 Lecture 5 Othello the Moor of Venice - . critical focus on act 2 scene 3 (the brawl scene). thought for the day!!!. one

Othello: The Moor of Venice - . the play itself. principal source is a story by giovanni battista giraldi aka cinthio in

Lecture Othello the Moor of Venice - . critical focus on act 3, most particularly the temptation scene. iago at end of

Othello Memorization - . practice. lines 56-58. it is as sure as you are roderigo , were i the moor i would not be iago .

OTHELLO - . year 13 english with mrs kelly. the play (some more general notes). tragedy of a man who kills the person he

The Tragedy of Othello: The Moor of Venice - . by william shakespeare. major character. othello–- a military general

A Game of Othello - . othello: popular board game (often known as reversi) 8x8 board, black and white tokens today, we