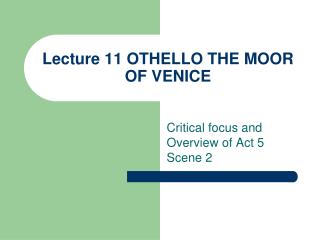 Lecture 11 OTHELLO THE MOOR OF VENICE Lecture 11 OTHELLO THE MOOR OF VENICE. Critical focus and Overview of Act 5 Scene 2. Death toll; In memoriam. RODERIGO, R.I.P. EMILIA, R.I.P. BRABANTIO, R.I.P. OTHELLO, R.I.P. DESDEMONA, R.I.P. . All these R.I.P. awards served by. Alive still — IAGO All thanks to, or no thanks to

Lecture 11 OTHELLO THE MOOR OF VENICE

Othello : Act 2, Scene 1 - . iago’s second soliloquy. as soon as iago has gotten roderigo to agree to his plan, he

In MemoriAm to our Classmates - . class of ’63 grants pass high school. so many things have happened since they were

The History of Othello - . shane é sullivan. in breif. a.k.a. the tragedy of othello, the moor of venice based on a

William Shakespeare The Merchant of Venice ANALYSIS - . plot and subplots. the main plot : the bond between antonio and

Lecture 2 Othello the Moor of Venice - . the exposition scene. reminder re- paper 3. play a read and study othello the

The Tragedy of Othello the Moor of Venice - . william shakespeare. themes. the reckless destruction of marriage by a

OTHELLO – ESSAY assessment task #2 - . how to prepare? where to start? what process should you follow?. …what does it