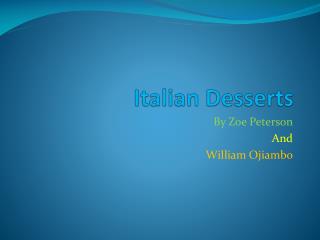 Learn Italian for beginners - Italian will help you navigate the streets of rome on your next trip abroad. italian is the

The Classic Italian Sub - . dylan cramer and ryan seibert etpt. click picture. history of the sub. the italian sub was

ITALIAN RECIPES - . italian recipes. italian cuisine is mostly based on the dietary pattern of the meditteranean diet

Potential Italian contributions to WFI - . l. piro, iaps-rome on behalf of the athena italian team. the rationale. t he

The 10 most expensive desserts in the world - . number 10. 10. what: warm golden plum soufflé where: the waterside inn; Italian Renaissance - . 1300-1600. italian states. the civilization of the italian renaissance was urban, centered on