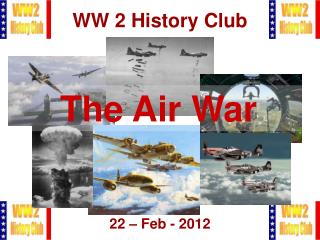 WW 2 History Club. The Air War. 22 – Feb - 2012. Before WWII. What is “Aircraft”? For purposes of this lecture, air craft includes any object that can rise above the local terrain and can perform a military role Does not have to be powered nor does it have to be manned. Before WWII.

The Historical Background of - . w.e.duboise. american scholar and activist and founder of the naacp. harlem in the

Essential Questions - Wednesday, november 3. essential questions. how do i find measures of central tendency and

Nazi ideas of Race: Social Darwinism - . lo : to understand and explain how hitler’s ideas of the ‘master race ’

U.S. HISTORY CHAPTER 12-3 THE COLLAPSE OF RECONSTRUCTION - . opposition to reconstruction. in 1866, the ku klux klan was

History of Photography - . what does the word, photography , actually mean?. photography:. we owe the name