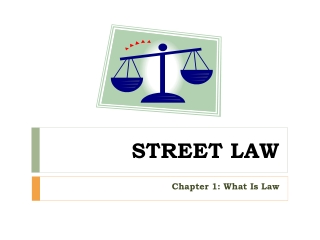 STREET LAW. Chapter 1: What Is Law. WHAT IS LAW. Rules and regulations made and enforced by government that regulate the conduct of people within a society. PROBLEM 1.1. Read problem 1.1 on page 5 of your textbook. Be prepared to share your answers and defend them. LAW AND VALUES.

Ch. 1 Introduction: Some Basic Concepts - . the study of the composition of matter and the changes that matter undergoes.