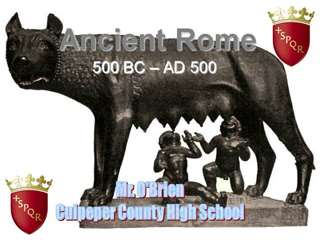 Introduction - . welcome to ancient rome. rome began as a small village on the italian peninsula in europe. rome grew

Ancient Rome - Rome began as a small village on the italian peninsula in europe. rome grew into an empire. the little

ROME - . part i: the republic part ii: the empire. the origins of rome :the myth. romulus and remus why was it not called

Rome The republic to Empire - . aim/goal: how was rome able to grow into such a large empire? do now: what does this

Rome - . unit three: chapter 6 . the founding of rome. legend . romulus and remus, twin sons of a princess and mars were

Rome - . unit 2: classical w orld. geography and early development of rome rise of the republic from republic to empire

Theatre in Ancient Rome - . “what we do in life, stays with us in eternity”. rome at the height of its power. history

ROME - . where in the world is rome?. the mythical founding of rome: romulus &amp;

Rome, Italy - . brief history of rome. rome was founded in 625 bc early rome was governed by kings, but after only seven

What We Have Learned About Ancient Rome - . geography. rome was located on land near the mediterranean sea. ancient rome

The Catholic University Of America Rome Program - . spend a semester in rome. why rome?. with cua. why rome with cua?.