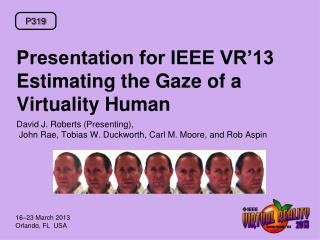 A Pointed Gaze - . a jackson chameleon rests on a branch of a tree at the nairobi national park in kenya. 'but people are

A presentation for the - Making national cultural heritage resources work for artists, artisans and communities: two

Virtuality and Events: The Hell of Power - . jean baudrillard (french) from the intelligence of evil or the lucidity pact

A Presentation to the IEEE Jamaica Conference, 2000 : - . “mechatronics, sociotechnical work systems and the

Estimating the reliability of a tree - . reconstructed phylogenetic trees are almost certainly wrong . they are estimates

Tobii Gaze - . by sean kimball. what is it?. gaze by tobii is an interface by that allows users to point, zoom, select,

The Female Gaze... - The female gaze. name a male character or celebrity who does not fit the ‘dominant male’ mould?

Overview of the VR Process - . an overview. the vr process consists of:. 1. outreach 2. screening the contact 3.