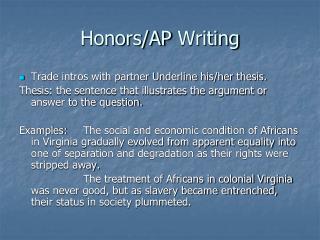 Honors/AP Writing. Trade intros with partner Underline his/her thesis. Thesis: the sentence that illustrates the argument or answer to the question.

What is a Eulogy? - . eulogy – a speech or writing prepared by someone close to a deceased person that honors the

Honors Biology: Chapter 4 - . a tour of the cell. the art of looking at cells artists have long found inspiration in the

Experience Nonfiction Writing - . cindy matthews. why focus on non-fiction writing?. ‘with the exception of attendance,