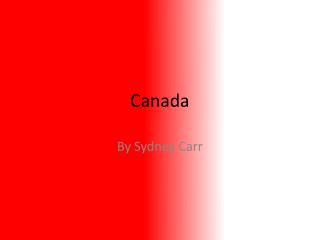 Canada. By Sydney Carr. Where is Canada Located?. Canada is located near Alaska North of United States of America Canada is in North America Western hemisphere Northern hemisphere Canada is near the Hudson Bay and the Pacific Ocean Canada’s Government - . rick mercer: everything you wanted to know about canada (but were afraid to ask) &amp;