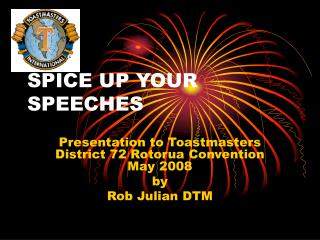 SPICE UP YOUR SPEECHES

SPICE UP YOUR SPEECHES. Presentation to Toastmasters District 72 Rotorua Convention May 2008 by Rob Julian DTM. The power of three. He was tall, dark, and handsome. She was a luscious, long-legged, blonde. It was a hot, bright, summer’s day. The room was dank, cold, and gloomy.

SPICE UP YOUR SPEECHES

Steal This Presentation! How to Create Content for Social Sharing - Paul gillin. author: the new influencers secrets of

EXFAC03-AAS v11 Language - . 4: language contact. why study languages? calendar – one language per month. thanks to

Welcome to Content Area Reading Strategies and Vocabulary Development - . do you…. teach around the reading in your

Personification - Is giving human qualities to animals or objects. personification. examples. example #1: the trees were

Word Choice - . english 1, september 6 th 2011. what is word choice?. it is the use of specific language within a text

Semicolons and Colons - . ; and :. semicolons used to join two independent clauses. just like the comma, a semicolon can

In the Beginning…Caring For Creation - . matthew 10:16 … be wise as serpents and innocent as doves. principles of