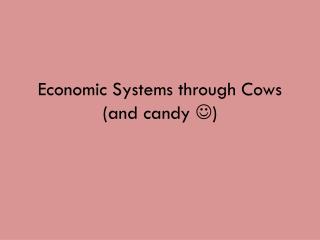 Chapter 23 Economics, Environment, and Sustainability - . 23-1 how are economic systems related to the biosphere?.

Chapter 2: Economic Organization and Efficiency - . the problem of designing and managing efficient economic

The Basics of Economic Growth - . economic growth is the sustained expansion of production possibilities measured as the

THE STORY OF THE CANDY CANE - . by becky kew – available online at www.gospelhall.org. each of the stripes and the

Answering the Three Economic Questions - . objective: what key economic questions must every society answer? what basic

Information candy - Library and internet research: online, offline, all around the town a faculty presentation by the