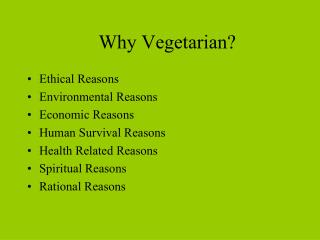 Appetizing and delicious vegetarian dinner ideas for vegans! - Being vegetarian doesn’t mean you have to eat dull and

Louisville Vegetarian Club - . living vegan; why and how by michelle pruitt. introduction. about me louisville vegetarian

Vegetarian Diets - . unit 16. perspectives on vegetarianism. many people are skeptical about vegetarian diets without

Vegetarian Diets - . a diet in which vegetables are the foundation and meat, fish, and poultry are restricted or

Why Should YOU Become a Vegetarian? - . leah marofsky. the practice of abstaining from the consumption of meat – red

Vegetarianism - . amy gross. what is vegetarianism?. vegetarian : a diet based on plants, fruits, vegetables, cereal

VEGETARIAN RESTAURANTS AT SINGAPORE - There are a great number of vegetarian eateries in singapore, but probably you will