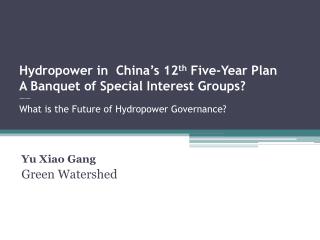 Hydropower in China’s 12 th Five-Year Plan A Banquet of Special Interest Groups? —— What is the Future of Hydropower Governance?. Yu Xiao Gang Green Watershed. Hydropower gain Vs. the environmental and social loss. Green- Duwamish River Watershed - . the green river watershed is the land area where rainwater drains to the