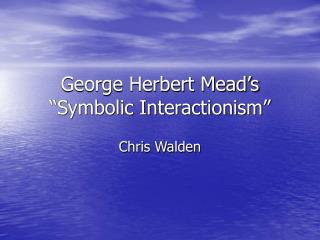 Shrinking Lake Mead - Nevada's lake mead, the largest capacity reservoir in the united states, is at record low levels as

Symbolic Mathematics Chapter 12 - . objectives. after studying this chapter you should be able to: create and manipulate

George Mason School of Law - . contracts ii mistake this file may be downloaded only by registered students in my class,

Symbolic Software Lab Fall Semester 2010 Dr. Stefan Maubach - . what is this course about?. part i: three weeks of

Interactionism - . society is like: a human body (functionalism) a league table (marxism) a play ( interactionism ) a