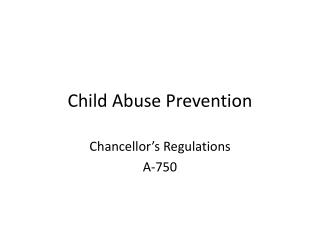 Officer Richard Neil (retired) - . 3-5 child abuse &amp; neglect. this is a hard topic area for anyone!. it should

Nurturing Parenting Programs® - . evidence-based programs for the prevention and treatment of child abuse and neglect.

PREVENTION “An ounce of prevention is worth a pound of cure”! - . prevention lecture outline why prevention?