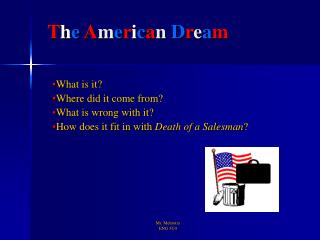 T h e A m e r i c a n D r e a m. What is it? Where did it come from? What is wrong with it? How does it fit in with Death of a Salesman ?. What is it?. Concept of money buying happiness Embraces Capitalism Material Possessions Financial mobility Opportunity Comfort Stability.